Building a Thread Pool in Bash

Strictly speaking Bash doesn't support Light-Weight Processes or threads. Nevertheless it is possible to implement a "thread pool"-like script without using any external tools. This can be useful if a high level language (i.e. Java, Python, Perl) is not available and the Bash interpreter is the only tool at hand.

To avoid confusion we'll use the term "pool of workers" instead of "thread pool". The following diagram illustrates the typical use case: 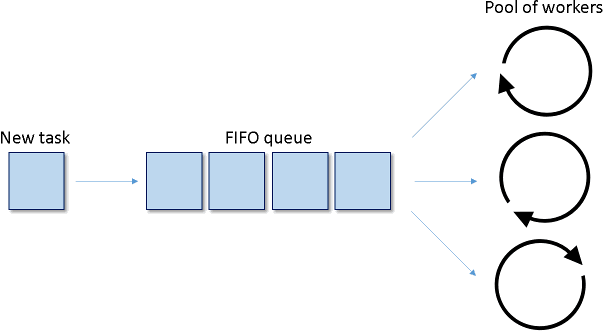 There is a process in charge of producing certain events or records, which can be processed in parallel. Let's call them "tasks". The tasks are inserted into a FIFO queue. There is a pool of workers monitoring the FIFO qoeue. Whenever a worker becomes idle and there is a task pending in the queue the task is dequeued and processed by the spare worker. If all workers are busy the tasks will accumulate in the queue.

Let's split the implementation into 2 components: the worker and the pool.

The worker contains the code, which will be executed in parallel. This script is not intended to be executed by the user directly. So, let's avoid the file extension ".sh" and the classical "#!/bin/bash" header. The script name can be just worker.

Note that the worker uses a file to synchronize the access to the FIFO queue. The file (mylock) is locked before reading the queue and unlocked after reading the queue. The synchronization is atomic. Therefore, only a single worker can perform a dequeue at a time. This is important to avoid concurrency issues.

In Bash 4 and later it is possible to optimize the logger to avoid starting a subprocess:

The pool is another script, which will start, stop and monitor the pool of workers. This is pool.sh:

Let's start the pool of workers:

There are 3 workers. As you can see with "ps", each worker is actually a subprocess:

We can stop the pool of workers anytime:

In order to increase or decrease the number of workers just modify the value of the WORKERS variable inside pool.sh. Let's start the pool again. After that we can queue a dummy list of tasks by just writing into myqueue:

The dummy tasks were processed asynchronously. Each worker was executed in a random order, but the overall workload was distributed evenly.

A complete sample project containing the Bash scripts is available in our GitHub repository. The code was tested in Bash V3.2.25 and later.