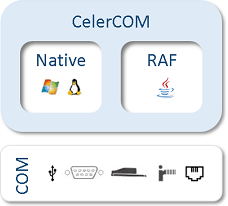 A native driver is used for the following OS and CPU:

The pure Java RAF driver is used as a fallback. The native driver is preferred:

Just add CelerCOM.jar to you classpath. The API is described in the javadoc documentation.

The CelerCOM library can be used as a simple TTY terminal as well. Just run CelerCOM.bat in Windows or CelerCOM.sh in Linux/Unix to launch the TTY. The COM port can be specified as the only configuration parameter inside the launcher script: COM_PORT.

In Windows the COM ports require the "\\.\" prefix if the port number is greater than 9. For example, valid Windows port names:

In Linux the typical name for a USB port is:

Note that you may have to be a member of the dialout group or root to have access to the USB or any other serial port in Linux. This is not necessary when interacting with TTY or FIFO files.

The TTY terminal will try to open the specified COM port and start sending and receiving text commands. If the device supports AT commands they can be sent through the TTY terminal.

Please, refer to our GitHub repository.