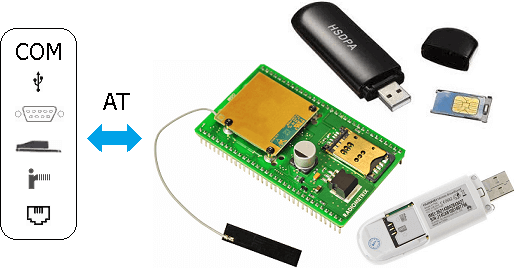 Two interfaces are supported by the AT Emulator: console and optionally raw TCP/telnet. The console interface can be used directly by launching the emulator in the shell. In order to setup the raw TCP or telnet interface it's necessary to edit the launcher script to configure the TCP port. A terminal emulator like telnet in Linux/Unix or PuTTY in Windows can be used to connect to the TCP port.

The TCP interface has a timeout of 1 minute. Therefore, it's necessary to input an AT command at least every minute to keep the connection alive. The console interface has no timeout.

The AT Emulator uses the following IDs:

Just unzip the AT Emulator to any suitable location:

Java 1.5 or later is required. It is recommended to configure the JRE_HOME or JAVA_HOME environment variable pointing to the Java installation path.

In order to configure the optional TCP interface edit the AT.bat or AT.sh to modify the following parameters:

Only the AT_PORT parameter is mandatory. The AT_WORKERS and AT_MAXCONN parameters are optional. They can be used to limit the number of TCP connections.

The following example configures the AT interface to echo verbose status codes, queries the modem manufacturer and model name, then writes some S-registers and reads them back:

Refer to the Hayes command set for the description of the available AT commands and S-registers.

Multiple AT commands can be specified on the same line. It is known as AT command concatenation. The commands must be separated by semicolons. The "AT" prefix must be removed for each subsequent command. The previous example can be rewritten as a concatenated sequence as follows:

Note: Some modems don't support AT command concatenation or restrict the AT commands which can be combined or limit the number of such commands.

The following example uses the GSM/3G AT command set to test the signal strength, query the modem status, verify the network registration and send a plain text SMS:

According to ETSI GSM 07.07 or 3GPP TS 27.007 it's mandatory to use Ctrl+Z to mark the SMS message end. However, if you use the console interface to input the AT commands the Ctrl+Z may generate conflicts. In Unix/Linux the Ctrl+Z will send the active session to the background. As a workaround you can input "set +m" before launching AT.sh to disable the job control.

It's also possible to access the AT Emulator through a virtual COM port. In Linux it can be done using socat:

If the AT Emulator is listening on port 2001 it will be possible to input AT commands through the virtual COM port /dev/virtualcom0.

There is a free solution for Windows as well: com0com.

Let's suppose that the default virtual COM ports installed by the com0com driver are COM18 and COM19:

Let's set AT_PORT to 2001 in AT.bat and launch the AT Emulator. In this case we can launch com2tcp pointing to COM18 like follows:

After that the AT interface will be available on COM19. It can be opened in PuTTY, Hyper Terminal or any other similar tool.

The AT Emulator source code is available in our public GitHub repository. Feel free to modify and recompile the source code. It is free for any use, including commercial.