An SMS with Link Preview is a standard feature supported by many Android and iOS devices. It consists in preloading specific web content (typically an image) from a URL in a plain text SMS. Link Preview makes the message more catchy. For example: 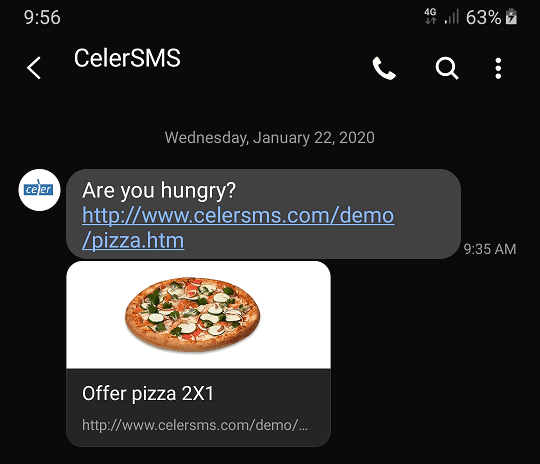 Link Preview is available since iOS 10, which was introduced in 2016. According to Apple Store Metrics more than 90% of the iPhone devices introduced in the last 4 years have a compatible version. Therefore, almost all iPhones can display a Link Preview in SMS.

The Link Preview feature is supported in Android since version 3.2 of the Messages app. Most Android devices launched since 2018 have a compatible version preinstalled, for example: Samsung A6 (2018), Samsung A7 (2018), Huawei Mate 9.

The Messages app is compatible with Android 5.0 and later. Therefore, it can be installed by the user on devices older than 2018 as well.

According to Google's Distribution Dashboard more than 38% of the Android devices have a compatible version. Therefore, it's safe to assume that at least 1 of every 3 Android phones can display a Link Preview in SMS.

It's possible to disable the Link Preview feature in the Messages app settings under the More settings menu: 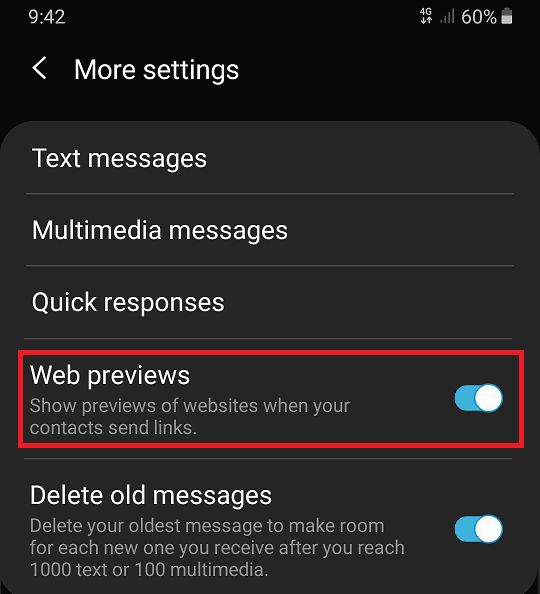 Note: In some Messages app versions it's optionally possible to allow loading the previews only on WiFi.

Before moving forward let's explain the main restrictions of the Link Preview feature in SMS:

When loading the URL preview the phone looks for certain meta-tags, known as Open Graph tags. The following example contains the minimum tags required for compatibility with both Android and iOS phones:

Notice that there are 3 Open Graph tags with "og:" prefix:

Additional Open Graph tags can be specified, but it's not mandatory.

There are some recommendations regarding the URL format and placement inside the SMS message:

It's recommended to avoid long URLs. If the URL is too long consider using a URL shortener service.

A good practice is to test the Link Preview before sending it to another user. In order to test the preview you can send the SMS to yourself. Just make sure your number appears in the phonebook contacts list before sending the message. If the preview doesn't load, even after a few seconds, try to doublecheck the previous recommendations.