Let's explain how to generate a multimedia message (MMS) including hypertext markup (HTML), for example: 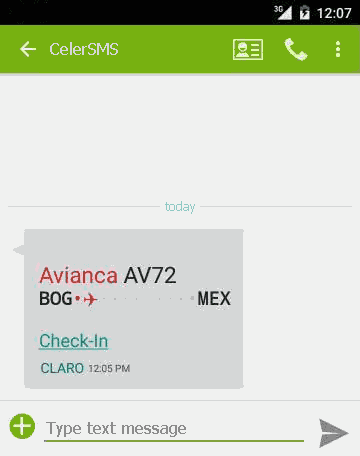 The MMS file used in the previous screenshot is available here. Note that a mobile phone doesn't usually support opening an MMS file directly. It's necessary to actually send the file through the operator Multimedia Messaging Service Centre (the MMSC) for the messaging application on the phone to interpret the file as a valid MMS and display it.

It's important to highlight that none of the standards mention that an MMS client must support HTML. Moreover, if an MMS client does support HTML, it doesn't necessarily support all hypertext features, like dynamic scripts, style sheets, interactive forms and so on. In fact, a very limited set of HTML features is supported by most MMS clients.

A basic subset of HTML tags and attributes is supported by most MMS clients, including the Android Messages app:

Other tags are automatically removed. So, it's not possible to include JavaScript, CSS, forms and other advanced HTML features.

Make sure that the "href" attribute contains a valid schema prefix ("http://" or "mailto:"). If no schema is specified the MMS client may crash. This bug was observed in Android Messages.

Even though the <img> tag is supported it is not possible to include an image. Some graphical container might get drawn, which means that the MMS client understands this tag, but there is no way to make it load an image file. So, one can include pictograms thanks to Unicode, but no real images. In the sample MMS file we used the U+2708 Unicode character presenting an airplane ✈.

The HTML markup in MMS is generally supported in iOS and a subset of Android devices:

The following HTML code simulates a boarding ticket notification. It is saved in a file named h.htm:

This is how it looks like in a web browser:

This is how we can include our HTML file h.htm inside the SMIL layout:

Notice that the HTML file doesn't replace the SMIL layout, it is embedded inside SMIL.