In the early versions of Android, the developers were able to obtain sensitive permissions by just declaring them in the AndroidManifest.xml file. Currently, only the normal (less sensitive) permissions are available in this way. The more sensitive permissions, such as location, require explicit user approval. Some permissions, like SMS, require selective approval by the Google Play team to allow publishing on the store. Moreover, the applications signed by the mobile operator may have special privileges, known as carrier privileges. This feature allows configuring the device (for example, setting up VoLTE services). Permissions can be temporary or permanent. Additionally, some permissions may behave differently if the service is running in the background. 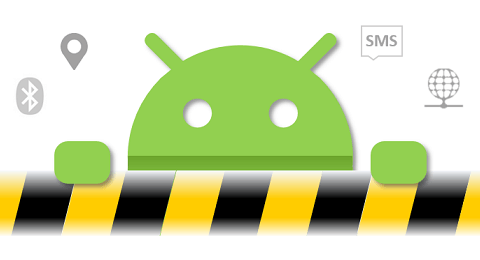 Install-time permissions, as the name suggests, are granted when the user installs the app. An example is the permission to access the internet.

To request an install-time permission, just declare it in the AndroidManifest.xml file, for example:

These permissions are visible to the user in the online store. However, the user may approve the installation without paying much attention to these permissions. From a security point of view, this is fine for normal permissions with minimum impact.

Install-time permissions are granted permanently for the application lifecycle.

On the other hand, the most sensitive permissions require additional actions, besides the declaration within the XML. For example, let's try to request the location permissions:

The ACCESS_COARSE_LOCATION permission is necessary to get the approximate location of the device. Usually, this kind of location is provided by the network services. On the other hand, the ACCESS_FINE_LOCATION permission is necessary to obtain the accurate location, typically through the GPS. Google recommends including both permissions to let the end user decide, whether to approve coarse or fine location, which is possible since Android 12.

Google recommends using the ContextCompat and ActivityCompat helper classes to validate and request permissions at runtime. For example:

Processing the result notification is optional. The user interaction is asynchronous. Therefore, processing the notification is the easiest way to implement a conditional code based on the user's decision. For example, if the user decides not to approve the permissions, the application could display an error message or fallback to an alternative functionality.

If you don't want to use the AndroidX library (Android Extension Library), it is possible to implement the same logic using the standard Android APIs. This option is not recommended by Google and may stop working in a future Android version.

In both cases, it is important to check the SDK version and implement some error handling with a try/catch block, as follows:

In this way, the permissions validation code is executed on Android 6 or later (SDK greater than 22), because in the previous versions these permissions were granted at installation time.

Keep in mind that since Android 12 it is recommended to separate the approximate location and precise location permissions. The user should be able to choose one of them, both or neither.

The same strategy can be used to request other runtime permissions. Prior to requesting permissions, it is recommended to display an information box explaining why these permissions are necessary. A descriptive message can help convincing the user to grant the permissions.

Starting with Android 5.1, there is a feature known as Carrier Privileges. This feature provides special permissions to the applications signed by a certificate matching the keys loaded from the SIMcard. Normally only the mobile operator or the SIMcard manufacturer can load certificates into the SIMcard. An independent application provider doesn't know the SIMcard administrative keys to perform this operation. Therefore, having the ability to manipulate the SIMcard contents may unlock special Android permissions.

Actually, the SIMcard stores the hash value (SHA1) of the key, not the key value. Optionally, along with this hash, the name of the application's package can be included. It corresponds to the package parameter declared in the AndroidManifest.xml. This can be useful if there are multiple apps signed with the same certificate, but the carrier privileges are restricted to some of them.

There are two methods to store the list of signatures in the SIMcard:

Currently the vast majority of SIMcards support the Global Platform standards. It doesn't mean that the ARA application is available on all SIMcards. Not all operators use this optional feature. There is an open source ARA version here:

Usually the mobile operators prefer commercial ARA implementations supplied by the SIMcard manufacturers. One of the reasons is that generic applications can cause intensive use of the SIMcard's non-volatile memory shortening its lifespan.

Some of the features available under carrier privileges are listed below:

A more complete list is available on the official Android developer site, although the public list is not exhaustive. The carrier privileges cover sensitive runtime permissions, such as turning data services on or off, blocking networks, selecting the mobile network manually or automatically and exchanging APDU commands with the SIMcard, among others. The next article will cover the latter use case in more detail.

The carrier privileges work even without mobile network registration. They work in airplane mode as well. If the phone supports dual-SIM or multi-SIM, Android tries to scan the ARA or ARF on all SIMcards available.

Android permissions management did evolve and became more restrictive. Although Android is an open operating system, not all the details regarding permission handling are public and documented.

If you need to use sensitive permissions and you can't get them for the latest Android version, switching to an older version can make it easier to get the necessary permissions. For example, reading the subscription ID (IMSI) in Android 1.6 was possible by simply declaring the READ_PHONE_STATE permission in the AndroidManifest.xml file.

If you're developing for mass use, it's important to reduce the use of permissions, especially sensitive permissions. Failing to do so increases security risks and affects the availability of the application (e.g., on Google Play).